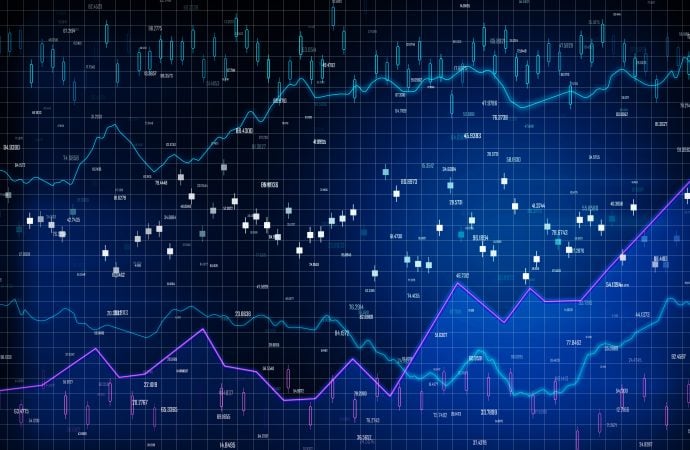 Supply at 1.2012/1.1937 remains a key zone to be mindful of on the daily chart, active since May 2018. Another interesting feature to be aware of is a possible falling wedge pattern between 1.2011 and 1.1612. Yet, do be aware some traders could interpret this arrangement as a descending triangle pattern.

RSI fans will also note the value modestly rotated higher above 50.00 by the week’s end, and remains entrenched within the upper region of an ascending channel.

Mid-week trading, as you can see, welcomed demand at 1.1711/1.1746, inspiring a reasonably motivated recovery into the week’s close. Monday was initially optimistic, firing to peaks at 1.1868. Though, as you can see, the rally was short-lived, establishing a shooting star candlestick formation followed by moderate selling.

At the time of writing, although price tentatively hovers around unchanged levels, supply from 1.1928/1.1902 (prior demand) remains a key zone to be mindful of.

Heading into London Monday witnessed buyers slice into buy-stops above 1.1850 resistance to test supply around the 1.1871/1.1861 region. This delivered a half-hearted shooting star pattern along with a subsequent decline to lows just ahead of the 100-period simple moving average at 1.1810.

Buyers making a stand going into US trading positioned candles within close proximity of 1.1850, as of current price. Persistent upside today could eventually dethrone the aforesaid supply zone and charge the 1.19 level.

In terms of the RSI oscillator, the value is seen rebounding from 52.89 support.

Daily price is in the process of chalking up what appears to be a rather large falling wedge pattern, on a timeframe that’s mostly trended higher since early 2020. Monday, however, finished indecisively, closing within the upper region of the falling wedge by way of a doji indecision candle. 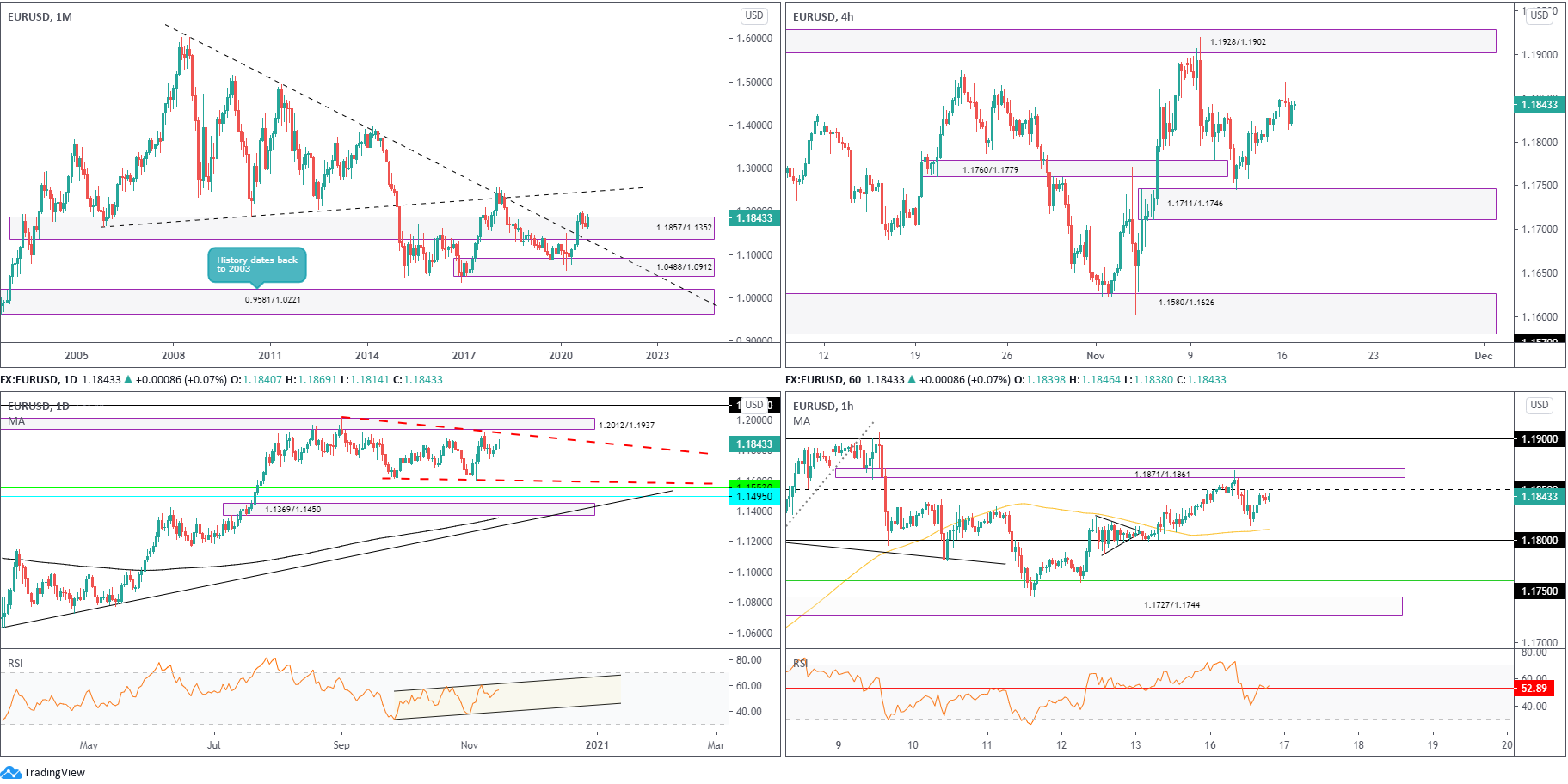 The months of September and October, as you can see, developed a mild correction and addressed the upper border of demand at 0.7029/0.6664 (prior supply). Buyers have so far responded well from the demand (up by 4.1 percent in November), free to explore as far north as 0.8303/0.8082 in the coming months, a supply zone aligning closely with trendline resistance (prior support – 0.4776).

Supply at 0.7345/0.7287 (a rally-base-drop formation) was under considerable pressure Monday as monthly buyers continue to flex their financial muscle off demand. Neighbouring supply at 0.7453/0.7384, extended from August 2018, therefore could be thrown in the mix.

The RSI indicator is on track to test overbought levels, after toppling 52.00 resistance at the beginning of November.

Resistance at 0.7340 is next on the list, a horizontal level that’s held buyers back since the beginning of September. A break here, however, uncovers another film of resistance at 0.7383.

Healthy buying off monthly demand at 0.7029/0.6664, in conjunction with weak daily supply from 0.7345/0.7287 and space for H4 and H1 buyers to stretch their legs declares a potential bullish stance in this market, technically speaking. With this being the case, a 0.73 (H1) retest could stir buyers today, with 0.7340 H4 resistance initially targeted.

Leaving behind supply from 106.33/105.78 and trendline resistance (111.68), as well as RSI resistance at 57.00, sellers made a strong show heading into the final stages of last week, finishing at session lows Friday.

Despite an indecisive start in Asia Monday, a vigorous spike to highs at 105.13 occurred heading into Europe/US trading, missing supply at 105.41/105.15 by a hair.

Transitioning into London hours on Monday, after price struck the H1 ascending triangle pattern (105.64/104.82) take-profit target at around 104.50 support (yellow), witnessed the pair latch on to a healthy bid to reach 105 resistance and the 100-period simple moving average around 105.10.

The day, however, saw prices settle back around 104.50 support as 105 round number sellers clearly made an entrance.

Price action, based on the monthly timeframe, remains around descending triangle support at 104.62. However, given the lacklustre effort from buyers, due to daily price shifting lower south of supply at 106.33/105.78, and intersecting trendline resistance (111.68), sellers could take control.

Leaving trendline resistance (2.1161) unopposed, the month of September fell 3.4 percent by way of a bearish outside reversal candle and snapped a three-month winning streak. This, despite November trading higher by 1.9 percent, advertises a possible dip to retest trendline support (prior resistance – 1.7191).

Although the daily chart observed a deep fakeout above resistance at 1.3201 last week, half-hearted bearish follow-through movement indicates the run above 1.3201 was formed to perhaps collect stops to step higher and target the 1.3483 September high.

1.32, as you can see, served well as resistance throughout the majority of London and also US trading yesterday, teasing the possibility of another test of trendline support (1.2854). Absorbing trendline support, on the other hand, throws light on the 1.31 level.

With reference to the RSI indicator, the value circled 50.00 on Monday, following a drop through trendline support.

Lacklustre selling around daily resistance at 1.3201, together with room to run higher on the monthly timeframe and H4 holding support at 1.3182, this communicates a possible bullish vibe. Considering this, H1 trendline support and the 1.31 level may be areas buyers have on their watchlists as we move into Tuesday’s session.