Wednesday had the common currency outperform against its US counterpart, lashing through the upper border of the current pennant formation. Yet, Thursday failed to deliver much follow through, capping a few pips ahead of the 200-day simple moving average, currently circling 1.1013.

Data had Eurozone PMIs come in better than expected on Thursday, although still languishing below 50. US initial unemployment claims dropped for a seventh successive week, totalling nearly 40 million filings since mid-March.

Early US observed a whipsaw through orders at the widely watched 1.10 level, a move which scored highs at 1.1008, before collapsing to fresh demand at 1.0955/1.0946. It was no surprise to see this area cap downside yesterday, as the base effectively represents the decision point to topple supply (prior demand) at 1.0971/1.0990. This equates to strength.

Beneath current demand, technicians will note the 100-period simple moving average at 1.0920 lurks close by, as does the 1.09 handle. 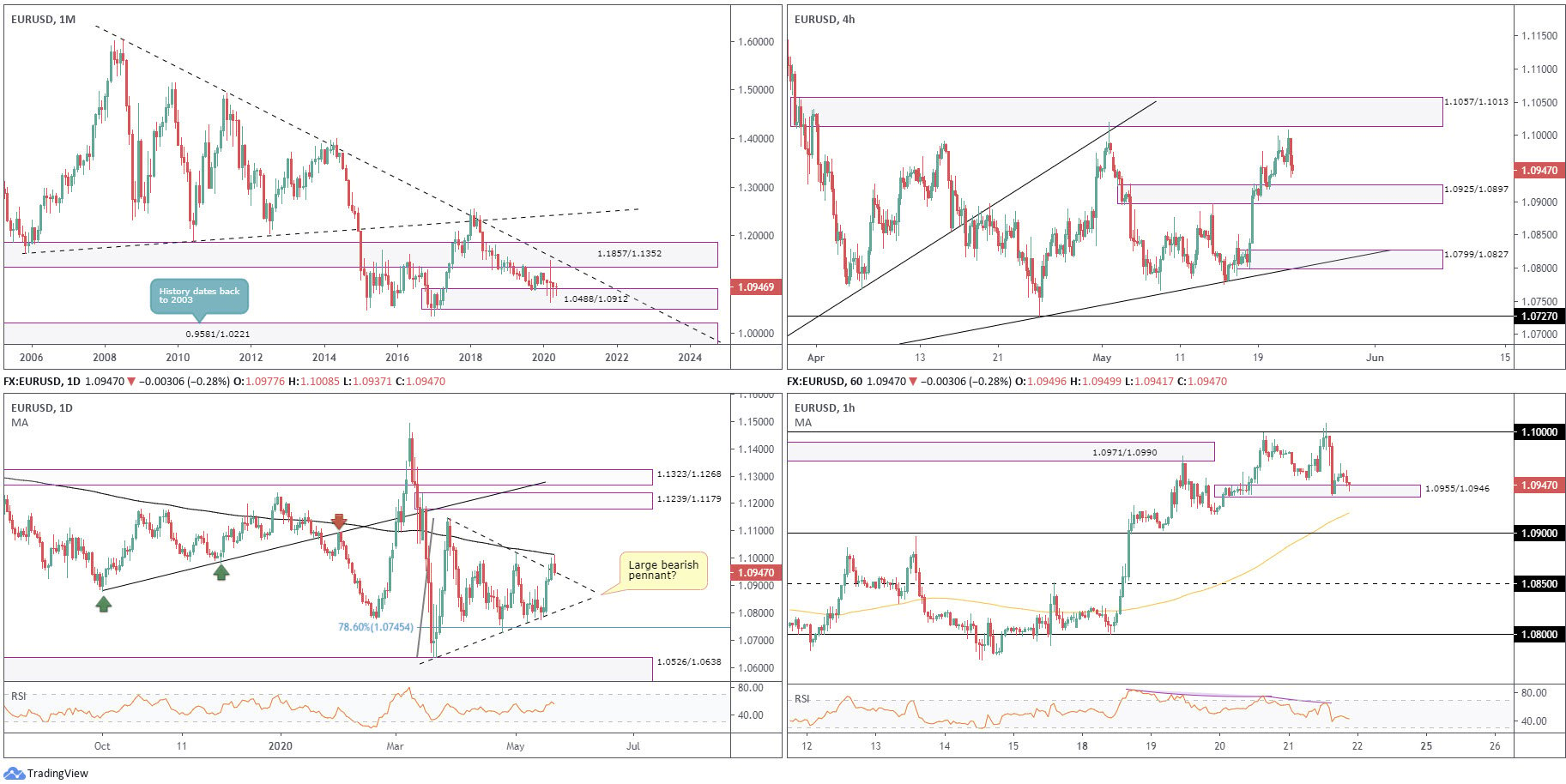 Supply at 0.6618/0.6544 remained in the fight Thursday, shattering a three-day winning streak off lows at 0.6410, by way of a bearish inside candle formation.

The week kicked off penetrating the upper edge of the falling wedge, with Tuesday and Wednesday extending ground and crossing paths with the falling wedge take-profit target, measured by taking the base and adding this value to the breakout point (yellow), at 0.6595. As of yet, however, we have been unable to close above 0.6595.

The value of the Australian dollar fell against the greenback Thursday, grasping 0.6550 in early trade after surpassing trendline support (0.6411). Heading into US trade buyers found legs and struck the base of the recent trend line, subsequently carrying the pair to lows at 0.6555 into the close.

Notably, we also see the RSI oscillator hiking under 50.00.

Short term, 0.6550 may come under fire today, fuelled on the back of traders liquidating (selling) at the H4 falling wedge take-profit target around 0.6595. 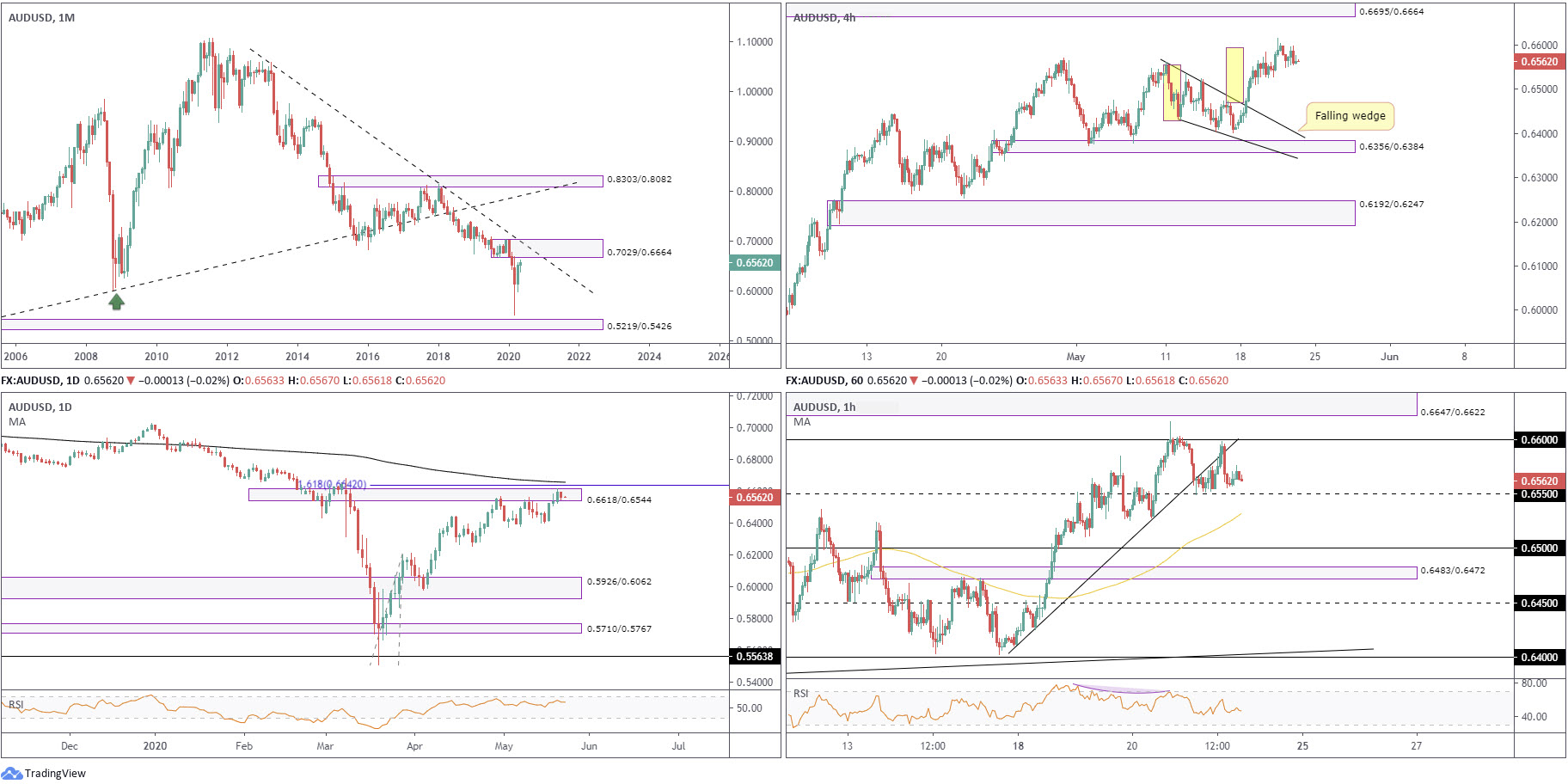 However, in order to reach the noted take-profit target, the 200-day simple moving average at 108.27 will need to be overthrown.

Since bottoming at 105.99, H4 activity has been chalking up what appears to be a rising wedge pattern, with price action closing in on the apex. Take profit targets out of rising wedge patterns are commonly measured by taking the base value and adding this figure to the breakout point.

Technically, though, current trendline support is on precarious ground, with H1 price retesting the underside of the base, as we write.

Should H1 hold space under the current trendline support, this may be considered a forerunner to a break lower out of the H4 rising wedge, a move that could swarm H4 demand at 107.21/107.41 and attack H4 support at 106.91. Intraday day traders may also be watching for a H1 close beneath the 100-period simple moving average.

Further out, daily price displays room to approach the 200-day simple moving average at 108.26 and the falling wedge take-profit target around 109.30.

As of late, we have seen the British pound claw back some losses vs. the greenback, derailing downside attempts. However, traders, particularly pattern traders, will note the neckline at 1.2247 holds firm.

Thursday, though eked out modest losses, finished somewhat neutral, clinging to channel support (1.2642 – prior resistance). It should also be noted local demand at 1.2184/1.2217 is in motion.

The 100-period simple moving average at 1.2208, coupled alongside the 1.22 level, withstood downside attempts heading into London on Thursday, prompting a mild recovery to highs at 1.2250, which, as you can see, held into the close.

Taking the above into account, H4 buyers appear fragile, facing daily pressure off 1.2247. This may lead to H1 tunnelling through 1.22 today and unlocking the door for bearish scenarios to at least 1.2150.