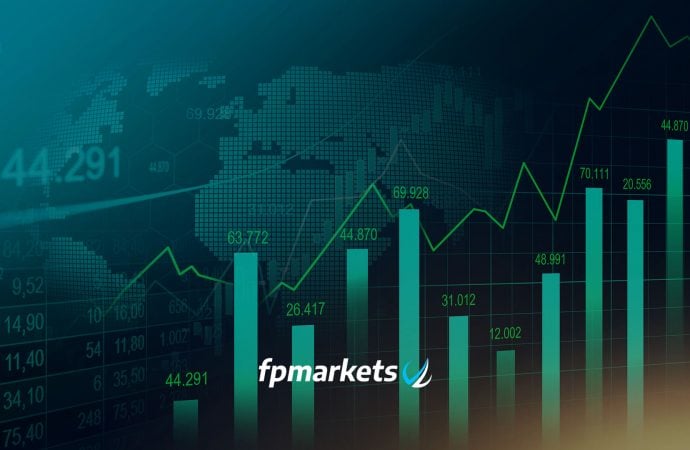 Aside from Tuesday’s decisive retreat off 1.0976, the euro has outperformed against its US counterpart this week. Wednesday rose to highs of 1.0999, breaching the upper border of the current pennant formation and shining light on the 200-day simple moving average (SMA), currently circling 1.1014.

Above 1.10, skies are reasonably clear until reaching 1.1050; that is, of course, if we’re able to overthrow the 200-day simple moving average at 1.1014. Indicator-focused traders may also wish to note the RSI oscillator recently produced bearish divergence out of overbought territory.

Although we’re seeing mild intraday weakness a few pips under 1.10 on the H1 timeframe, buyers may still have a hand in this fight until reaching the 1.1015 region. 1.1015 essentially represents the underside of H4 supply at 1.1013 and the 200-day simple moving average at 1.1014.

Therefore, technical studies indicate we may see a run of buy-stops above 1.10 today to bring in 1.1015 before sellers make their debut.

Monday had the candles penetrate the upper boundary of the falling wedge pattern, with Tuesday and Wednesday extending upside and crossing paths with the falling wedge take-profit target, measured by taking the base and adding this value to the breakout point (yellow), at 0.6595.

The run of stops above 0.66 may have provided sufficient fuel for intraday sellers to push lower as we enter the more liquid sessions today. Reducing risk to breakeven at H1 trend line support is an idea, with a take-profit target set at 0.6550.

A break back above the current supply could see 108 re-emerge as resistance; a break lower, on the other hand, throws 107 in the frame, owing to the lack of active demand seen to the left of current price.

However, a break of the H1 trendline support, albeit against higher-timeframe flow, is still noteworthy. A decisive H1 close south of the trendline may see intraday sellers attempt moves to 107. 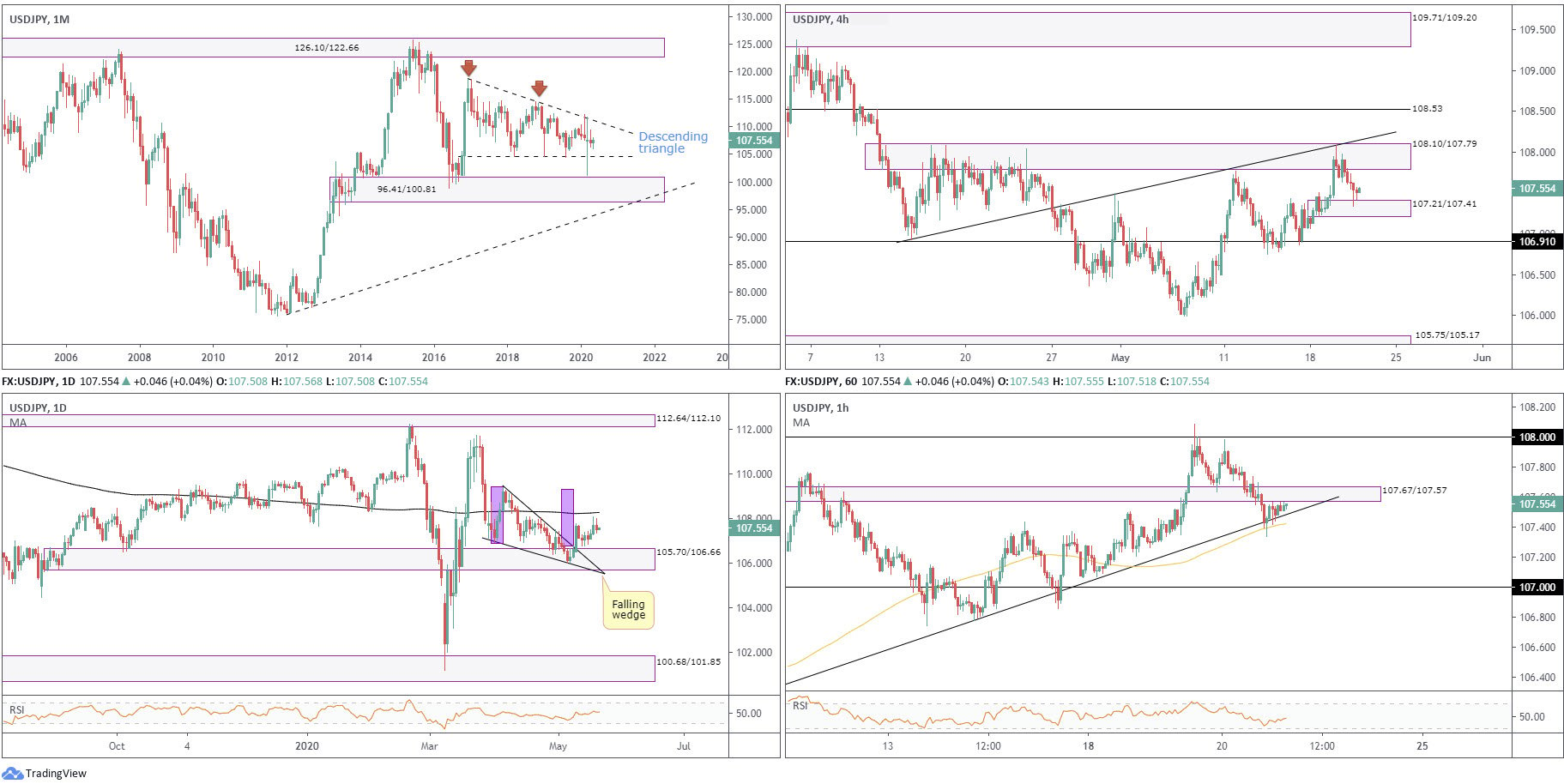 As of late, we have seen the British pound claw back some losses vs. the greenback, derailing downside attempts. However, traders, particularly pattern traders, will note the neckline at 1.2247 holds firm, with yesterday producing a half-hearted shooting star candlestick pattern.

Wednesday finished somewhat neutral, but not before taking price outside of channel resistance (1.2642) and retesting the base as support.

Additional supply is seen to the left of price around 1.2280 (lower arrow), but this base may simply be a reaction off the upper zone at 1.2324 (upper arrow).

The violation of the noted channel resistance, therefore, shines the headlights on supply from 1.2477/1.2438.

Since connecting with supply at 1.2282/1.2222 on Tuesday, the H1 candles have been entrenched within a range between the noted supply and local support derived from 1.2223.

External support/resistance is found at 1.22/23, with support intersecting with the 100-period simple moving average at 1.2201.

In a nutshell we have the following to work with:

Taking the above into account, H4 buyers may find a footing today, boosted by monthly price and also H1 action bottoming just ahead of 1.2223. On the other hand, daily sellers remain at the underside of the daily double top neckline from 1.2247 and could still attempt to reach its take-profit target at 1.1855. 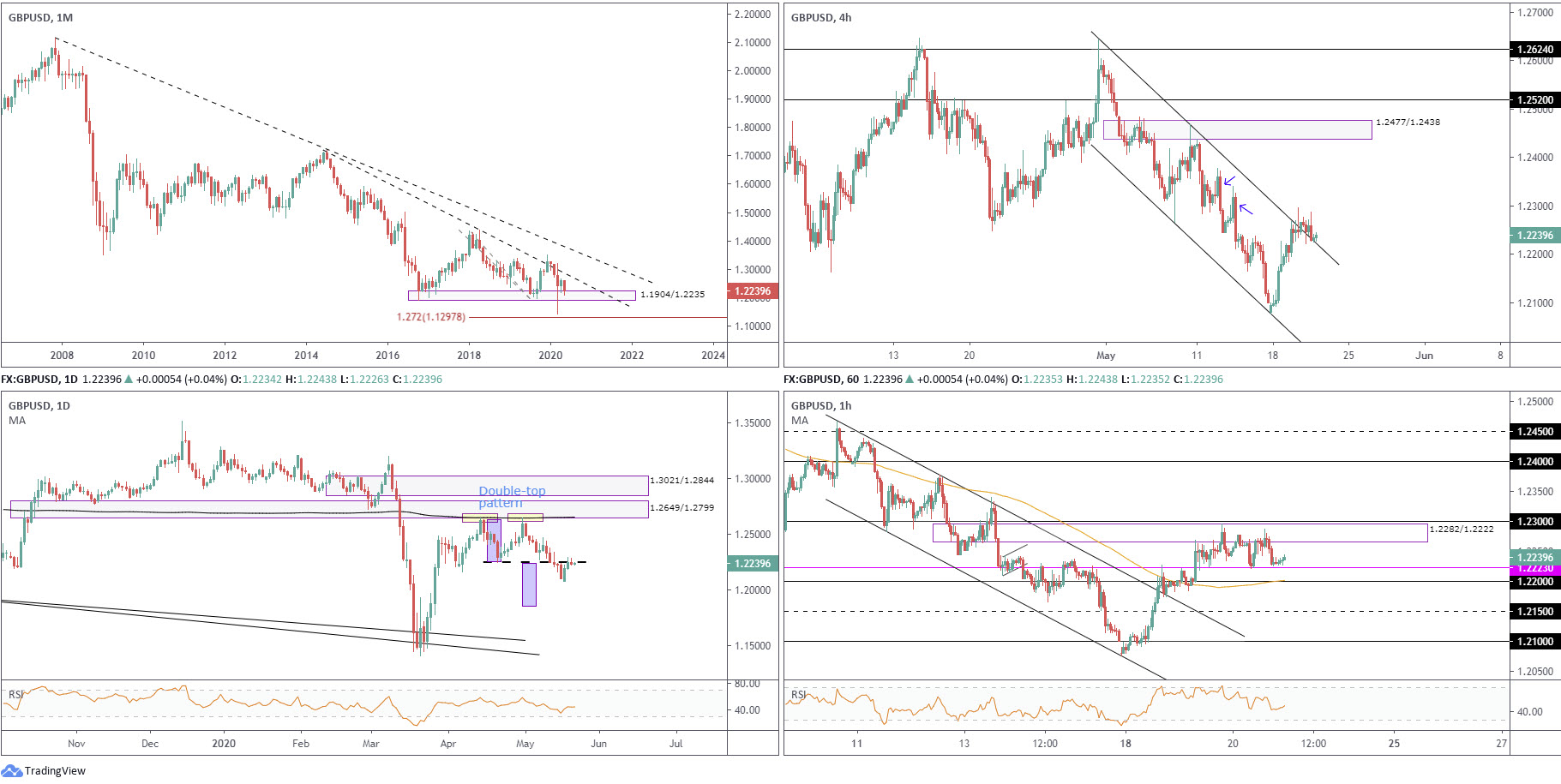