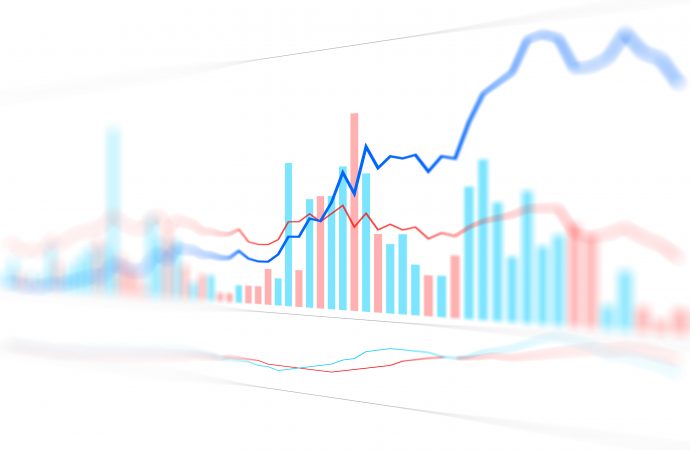 Joining the lower edge of weekly resistance at $1.1473-1.1583, price recently whipsawed above a 7-month trendline resistance, extended from the high $1.2254, established by way of a bearish engulfing candle (a reversal pattern in which focus is directed to the real candle body rather than upper and lower shadows). Despite a mild recovery attempt on Wednesday, sellers continue to have the upper hand. Should bearish follow-through emerge, Quasimodo support offers an obvious target at $1.1213.

In terms of where we stand on the relative strength index (RSI) at the moment, the value is circling the 50.00 centreline after rebounding from oversold. Resistance derived from this mid-point adds confluence to the aforementioned price resistances.

The relative strength index (RSI) continues to circle the 50.00 centreline. $0.7416-0.7315 sellers, therefore, will likely be watching for the indicator to secure position beneath the 50.00 neighbourhood, movement informing market participants that average losses exceed average gains.

Leaving Quasimodo support at $0.7168 unchallenged, London’s morning session on Wednesday witnessed price reclaim $0.72+ status and whipsaw above local (double-top) peaks at $0.7229 to touch gloves with a moderate decision point at $0.7254-0.7238 as we entered US trading. Note that this area houses the H4 resistance at $0.7250 within its upper boundary.

The relative strength index (RSI), in line with price movement greeting the decision point, touched overbought space and, as of writing, is attempting to drop through 60.00.

Tuesday settling in the shape of a shooting star candlestick formation attracted a bearish following on Wednesday.

Quasimodo support-turned resistance at ¥114.71 elbowed into the frame Tuesday and, held a bearish vibe on Wednesday. Pursuing lower prices highlights a familiar decision point at ¥113.54-113.78, set a few pips above Quasimodo support at ¥113.22.

The ¥115 reaction shows limited support until reaching ¥114. However, ¥114 also advertises itself as a weak level exhibiting little confluence to write about. Beyond the round number, Quasimodo support sits at ¥113.64, closely shadowed by two support levels at ¥113.34 and ¥113.56.

Also worth noting is the relative strength index (RSI) nearing oversold terrain after retesting the lower side of the 50.00 centreline.

Three back-to-back daily bearish candles delivered the currency pair to support at $1.3602, deriving technical impetus from the lower side of the 200-day simple moving average at $1.3731. Drawing a bid from current support on Wednesday knocked some of the wind out of the GBP decline and underscores the prospect of a bullish challenge.

Below $1.3602 re-opens the door for a return to neighbouring trendline resistance-turned support, taken from the high $1.4250.

Momentum, according to the relative strength index (RSI), is seen attempting to regain some poise around the 60.00ish region. Though rupturing this number casts light on the 50.00 centreline.

Wednesday settled around resistance at $1.3622-1.3646—plotted just south of resistance at $1.3668—and provided candlestick enthusiasts a shooting star formation, generally recognised as a bearish signal. If sellers take control, aside from a number of ‘local’ lows, demand is visible at $1.3428-1.3444.

However, by entering short at this point, traders are effectively selling into daily support from $1.3602. Conservative traders, therefore, may elect to wait for a price close beneath $1.36.

Following a whipsaw under $1.36, Quasimodo support stepped in at $1.3580 and encouraged a bid back over $1.36 and also pulled the relative strength index (RSI) above the 50.00 centreline. Note the latter is set to be retested as support.

Resistance calls for attention around $1.37, a psychological barrier that’s served well as support and resistance since early November 2021.

The above presents a difficult trading picture, technically speaking. As a result, traders are likely to wait and see if H1 can punch through $1.36 and H1 Quasimodo support at $1.3580 before taking a bearish position, targeting H1 support at $1.3533 and $1.35 (aligns closely with the daily timeframe’s trendline resistance-turned support, taken from the high $1.4250).

In terms of long positions, technicians are likely to want to see a price close above H4 resistance at $1.3668 form, clearing space to $1.37 on the H1.