With December trading higher by 1.3 percent, this argues additional upside may be on the horizon, with ascending resistance (prior support – 1.1641) perhaps targeted.

In tandem with monthly buyers flexing some financial muscle, daily buyers squeezed through the upper perimeter of an early descending wedge pattern (correction) between 1.2011 and 1.1612 (some may interpret this arrangement as a descending triangle pattern) and is on track to join hands with resistance at 1.2095.

Above resistance, pattern traders will likely have their eye on the descending wedge pattern’s take-profit target at 1.2309 (yellow).

Discovering support off the 100-period simple moving average late Monday fuelled an early 1.1950 resistance breach Tuesday, followed by a 1.20 breach heading into the US session.

After a brief period of hesitation under 1.2050 resistance, the pair steamrolled over the latter into the closing stages of Tuesday’s session.

While 1.21 is in view, RSI action recently touched familiar overbought resistance at 81.50.

1.21 marks interesting resistance, joined closely by daily resistance at 1.2095 and is located within H4 supply from 1.2130/1.2096. The reaction from this region, however, may be short-lived having seen monthly price eyeballing higher levels, in line with the current uptrend (visible on the daily chart).

With the above taken on board, a 1.2050 support retest could be on the watchlist for some buyers today. 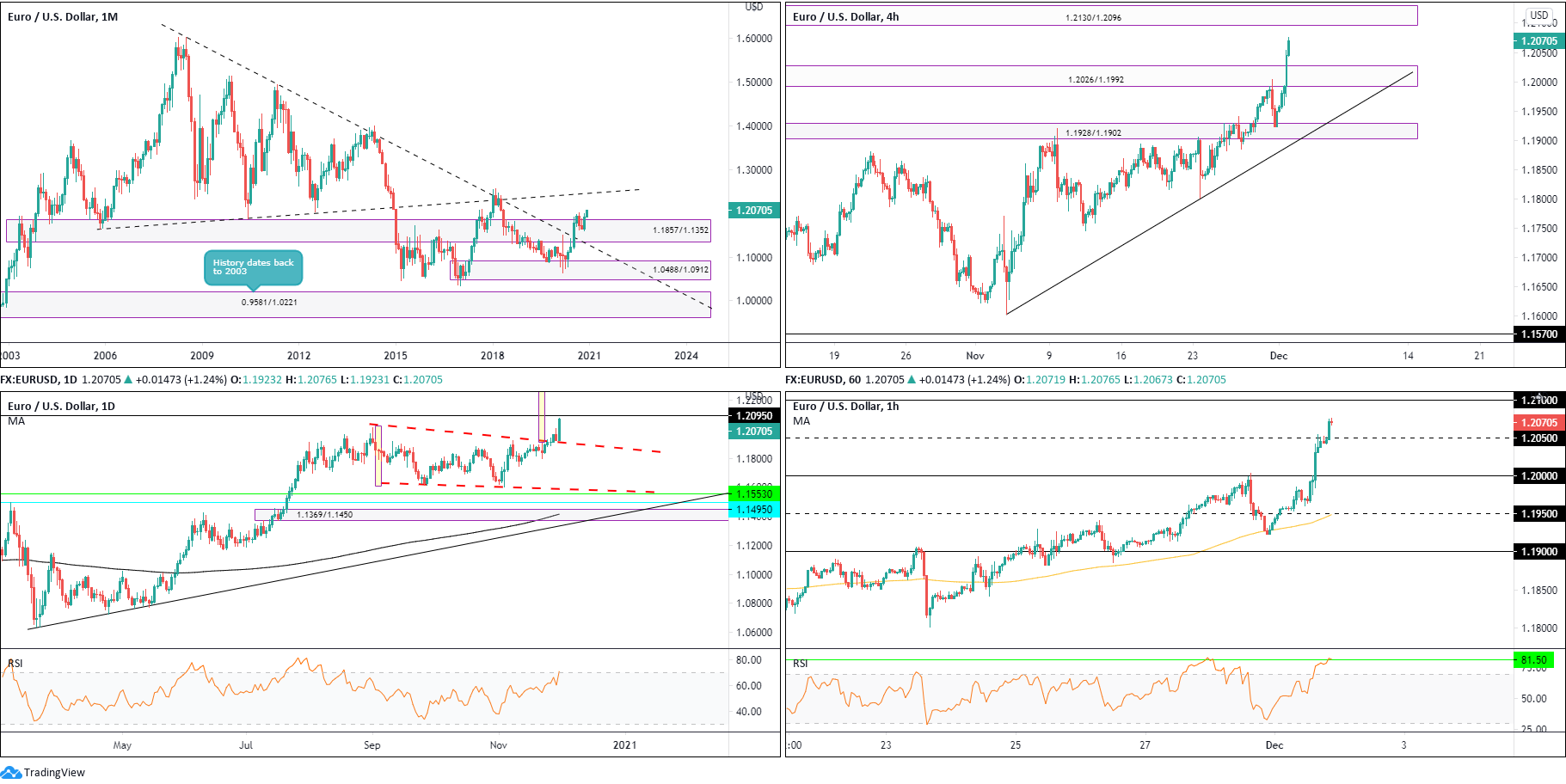 Following a mild correction that addressed the upper border of demand at 0.7029/0.6664 (prior supply), buyers have so far responded well. Up by 4.5 percent in November, buyers appear free to explore as far north as 0.8303/0.8082 in the coming months, a supply zone aligning closely with trendline resistance (prior support – 0.4776).

The trend on this timeframe has remained to the upside since March 2020, in spite of the lengthy correction since September. Therefore, buyers could be preparing to dethrone 0.7453/0.7384.

Monday’s retracement carted price action back to 0.7340, gifting traders another opportunity to buy this market.

Last week had H4 take over the upper boundary of an ascending triangle, made up between resistance at 0.7340 and trendline support from 0.7221. Those initially long the 0.7340 breakout have likely tied up stops beneath the pattern’s associated trendline support (0.7221).

RSI traders, however, will see the value trending higher, recently establishing a higher high and making its presence known above 50.00.

Monthly price trading strongly from demand at 0.7029/0.6664, along with daily price trending higher and rebounding from daily demand at 0.7345/0.7287, places a question mark on the H1 bearish pennant pattern.

Therefore, this could generate a H1 close above the 100-period simple moving average, or maybe even form a 0.7350 retest to allow additional buyers into the market.

Areas of consideration on the H4 chart are:

As we make our way into Wednesday’s segment, the 100-period SMA is nearby, with a break perhaps pushing for the 104 level.

Limited resistance is present on the H4 timeframe until reaching 105.06/104.89 (Fib zone), though H1 is threatening another visit to the 100-period simple moving average. Breaking below here could trigger an intraday bearish scene towards 104. 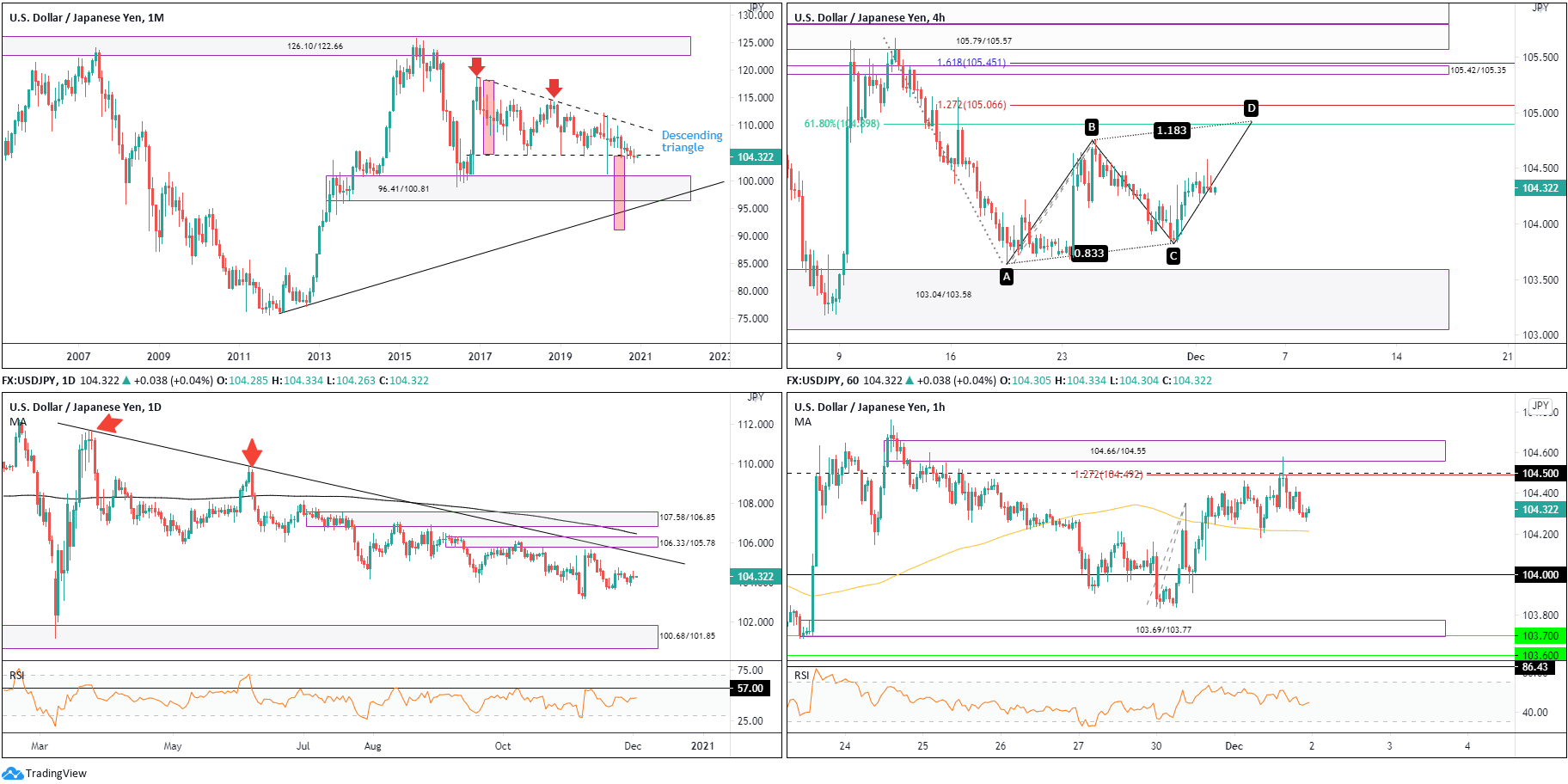 Sellers have so far been reluctant to commit, though with monthly trendline resistance making an entrance and daily supply up ahead at 1.3622/1.3467, sellers may lead the way.

Recent flow, as you can see, is in the midst of establishing a small bullish flag between 1.3441/1.3415. This follows Tuesday’s 1.34 breach during the US session.

As for the RSI indicator, a double-top pattern formed just ahead of overbought levels Tuesday. Although considered a possible bearish signal (beneath its 45.00 neckline), sellers currently appear hesitant.

Although monthly price flirts with trendline resistance, daily has room to manoeuvre until reaching supply at 1.3622/1.3467. This may give H1 buyers a push to breakout above the currently forming bullish flag. A 1.34 retest may be in order before buyers pull the trigger.