An Introduction to Candlestick Patterns in Forex Trading 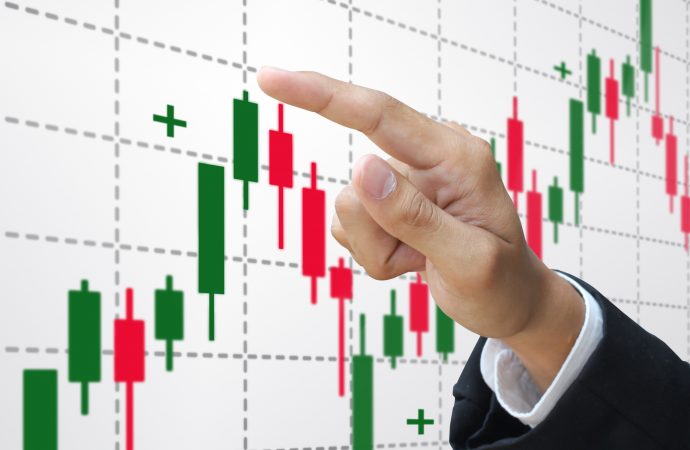 Boasting a long and colourful history, Japanese candlestick charts are universally acknowledged within the technical community as a means of displaying price action across multiple time periods (timeframes).

Steve Nison is an author who is credited with showcasing the power of candlestick pattern analysis to the western world. The author is known for publishing Japanese Candlestick Charting Techniques in 1991 and publishing Beyond Candlesticks in 1994. Through years of research, translations and assistance from Japanese candlestick practitioners, Nison amassed a wealth of material dating back to the 1700s.

The most prominent trader according to Nison’s research is Munehisa Homma, a Japanese rice trader who employed previous price data to estimate future market movement.

The candlestick comprises of a session’s high (upper shadow or upper wick), a session’s low (lower shadow or lower wick), the opening price, and the closing price and real body (figure 1.A). This differs from a line chart, which is a series of closing prices that establishes a continuous line.

A bar chart delivers a comparable structure, though is void of a real body. However, the open and close prices are displayed through horizontal lines that protrudes from the stem. It is said Japanese traders believe the essence of price is defined by the real body.

High and low prices indicated on the candlesticks inform chartists of a period’s extremes. 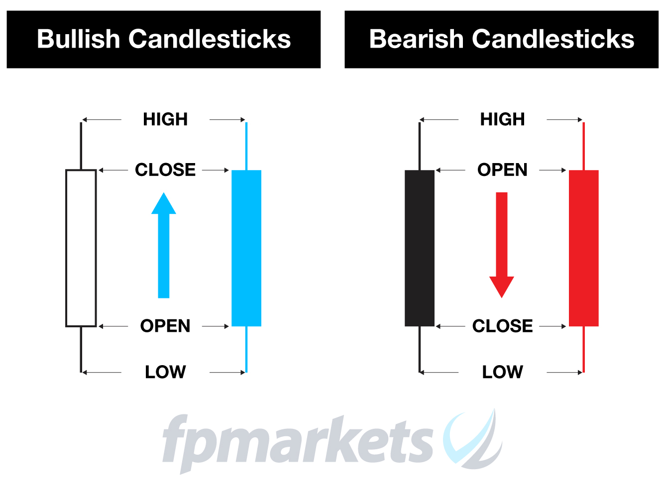 Featured in a number of candlestick pattern variations, such as the ‘morning and evening star’, or ‘harami cross’, the doji represents an isolated formation, shaped by way of a cross with a small body (real).

Conveying an equilibrium through ‘indecision’, a doji echoes a lack of enthusiasm, threatening the possibility of a reversal in price.

Conventional dojis work with a centralised real body (opening and closing prices are equal [there is flexibility to this rule: the open and close range must not be wide enough to be an obvious spinning top]) and well-defined candle highs and lows. The interruption in price movement demonstrates slowing momentum.

A northern doji forms after an advance, while a southern doji is established after a decline.

A long-legged doji exhibits a variation of a traditional doji pattern, presented with extended upper and lower shadows (long wicks). Similar to the doji, a long-legged configuration exposes a period of indecisiveness, only more excessive.

Both dragonfly and gravestone dojis tend to generate more of a stir in the technical arena.

A dragonfly doji forms a narrow open and close range at the upper edge of the candle’s structure; a gravestone doji is the mirror opposite, establishing a tight open and close setting at the lower perimeter of a candle’s range.

Where a doji forms is crucial.

A dragonfly doji is acknowledged as a bullish reversal pattern in oversold markets; a gravestone doji functions as a bearish signal in overbought conditions.

The aforementioned doji formations are also found at support and resistance levels, and often categorised as signals for confirming technical structure. 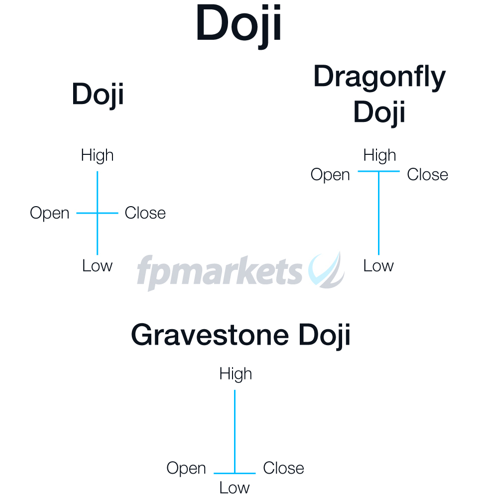 Configured as a one-candle pattern, the hammer candlestick is identified following a decline, providing a bullish signal. Nison, in his book: Japanese Candlestick Charting Techniques, stated that in a downward market, a hammer signal is the market ‘hammering out a base’, essentially feeling for a bottom in price movement (figure 1.D).

The real body colour is irrelevant and should be accompanied by a lower shadow at least twice the size of the real body. Furthermore, it’s best if the pattern has little to no head (upper shadow).

The hanging man candle formation takes on similar construction to the hammer pattern; the only difference is location: following an advance in price (figure 1.C).

Although an identical pattern delivering a bullish and bearish signal may appear odd, technicians familiar with western island tops and bottom patterns should see some similarity. The psychology behind the hanging man informs traders that although buyers drove price higher into the close, the initial sell-off implies interest to the downside is perhaps increasing.

The hammer is considered a bullish reversal signal; therefore, it must form in a down move. Entry is typically two-three pips above the candle’s upper shadow and a protective stop-loss order is commonly positioned beneath the candle’s lower shadow.

A shooting star is a bearish configuration, formed through a real body located at the lower range of the candle and joined by an upper shadow at least twice the size of the real body. Note that its best to see little to no lower shadow.

The colour of the body is unconnected.

A shooting star forms following an advance and offers bearish reversal structure; the pattern can also provide confirmation of resistance. The inverted hammer pattern, on the other hand, takes shape after a decline, highlighting a bullish reversal and delivers support confirmation.

It’s important to note that just as a hanging man requires additional confirmation, so does the inverted hammer. The rationale behind the confirmation is although buyers did make a stand, it was not sufficient to form a positive close. Entry conditions for the shooting star are identical to the hammer pattern, only reversed. 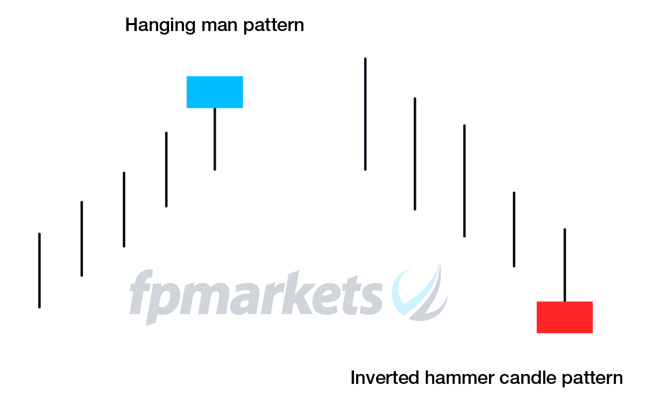 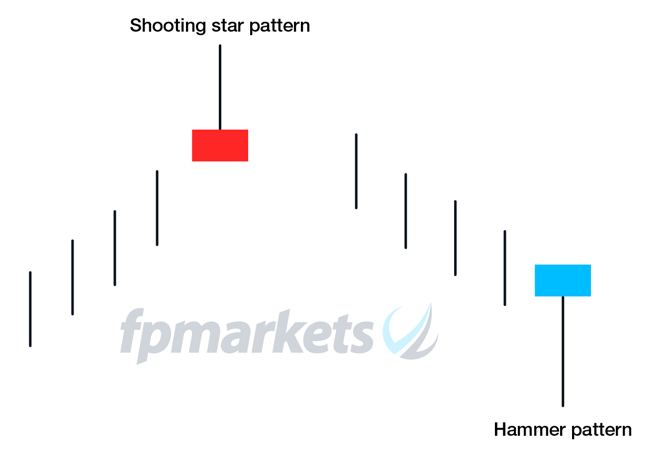 Shaped by a combination of two candles, bullish and bearish engulfing formations are reversal patterns.

As reversal structure, a bullish engulfing pattern must form after a decline in market price.

The candle pattern is constructed by an initial red candle (first candle: bearish close), followed by a bullish real body (blue). The key observation with engulfing patterns are the real bodies. The preceding candle’s real body must be engulfed by the subsequent candle’s real body (figure 2.A). The second candle does not need to engulf the previous candle’s range (high and low).

A bearish engulfing pattern is the opposite to a bullish version.

What bullish and bearish engulfing patterns show are a shift in sentiment to the upside or downside. For this to be seen, a clear trend must be present. It is important to note that the preceding candle must be of opposite colour to its engulfing candle. 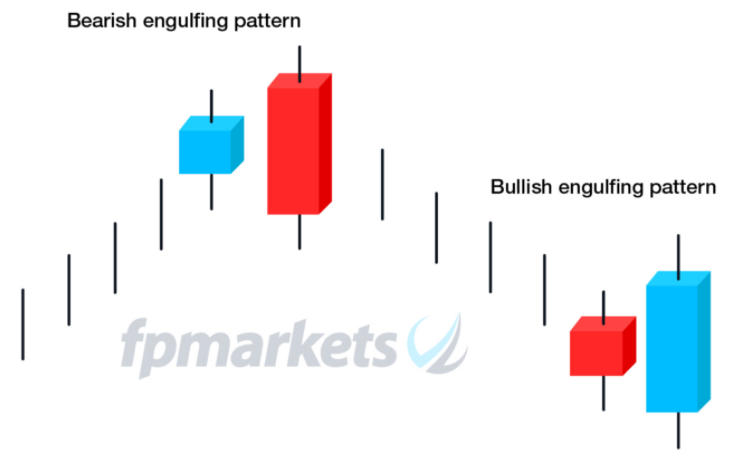 Candlestick patterns are seldom traded in isolation. Combined with western technical analysis patterns, candlestick formations can help validate an area’s validity and forecast shift in sentiment. While this article focussed on reversal candle patterns, continuation forms exist, such as ‘Windows’ and ‘Rising and falling three methods’

The principal difference between western and Japanese charting is the open and close: the latter generates a broader range to work with and is easier to interpret.