“Never short a dull market”, a market truism that was tested in the last week.

The past week has been one of further consolidation following the Bull trap breakout referred to last week, immediately reverses.

Markets are considering the implications of a 2nd wave pandemic and the economic outcome.
Don’t fight the Fed, and “don’t fight the market”, both will be right in the end.

WTI Oil break out from a significant resistance level last week but remains in consolidation.

XJO WEEKLY     Price structure:
Another rejection week within the marked boundaries of the developing Secondary movement. A closing breakout above 6198.6 seems difficult with rejection back into the middle of the range.

Without positive news a follow through lower could be expected in the coming week with 5720 the key support level. A close below 5970 would confirm this scenario.

Indicator: Relative Strength
Relative Strength, again still nothing to see here, sits above the “50” level, and pointing UP, suggesting a balance in price momentum remains.
Further consolidation in the price chart may this this dip below the key 50 level. 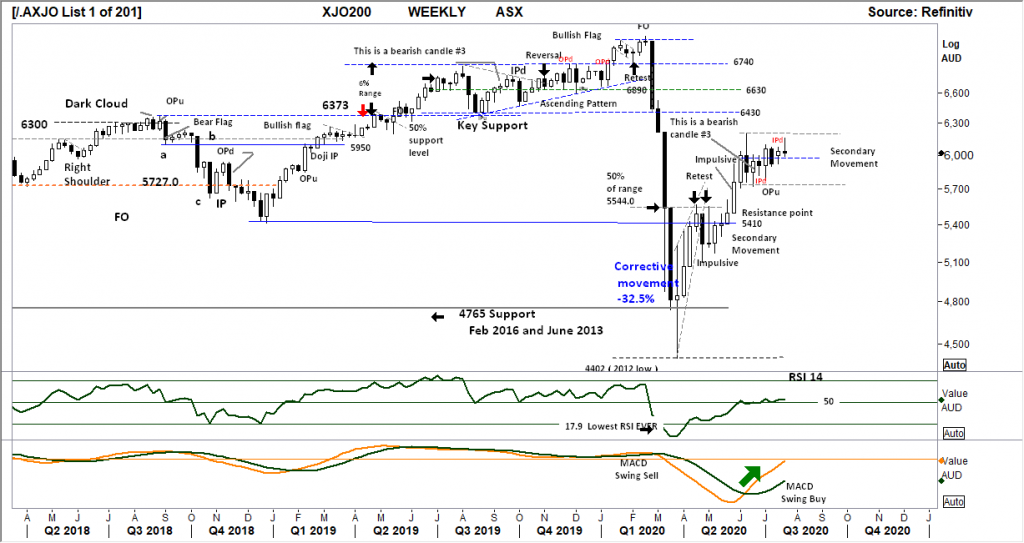 Comments from last week: Another short range IPu (inside period)  week, more importantly for the bullish view, the week has closed above the mid range within the unfolding Secondary movement. These consolidation periods are an important development within Primary trends. 6200 remains the Weekly resistance level of interest. Underlying Primary trend remains UP.

Indicator:  Relative Strength
RSI has turned lower as would be expected with this type of price weakness ( 9 down days in 14). The move below the “50” level is concerning and may be the early sell signal coming for the larger Weekly time frame ( above) 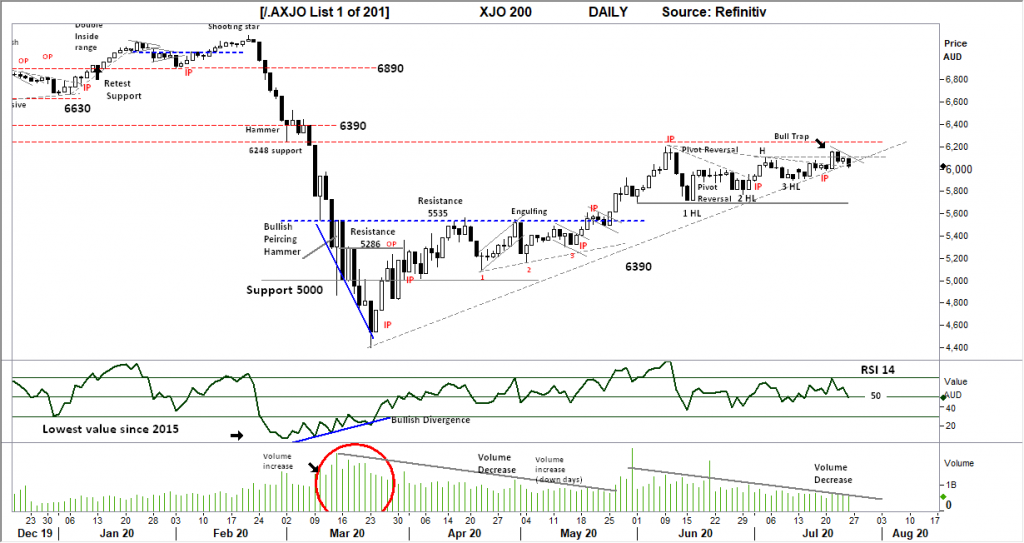 Comments from last week:  The 3rd higher low (3HL) is now confirmed, last Wednesday’s strong movement higher followed by Thursday, Friday remaining within this range is setting up a bullish breakout. The pattern developing from the 1st week of June is now complete ( 3 lows). A good setup for a breakout higher. Short term traders would be on guard for a Bull-trap movement (reversal) from the first break above 6200.

S&P 500 WEEKLY
Price structure:
A 6th bar breakout from the last high point with an intra week movement into the GAP area followed by immediate rejection back into the price range boundaries.
Further price rejection back towards the mid point of the range could be expected.
Consolidation period within Indices’ can last for many months.
The key in the coming week will be the 3096 midpoint level to hold on any price decline.
With the UP Primary trend the GAP will remain a price target on any bullish news to hit the markets. 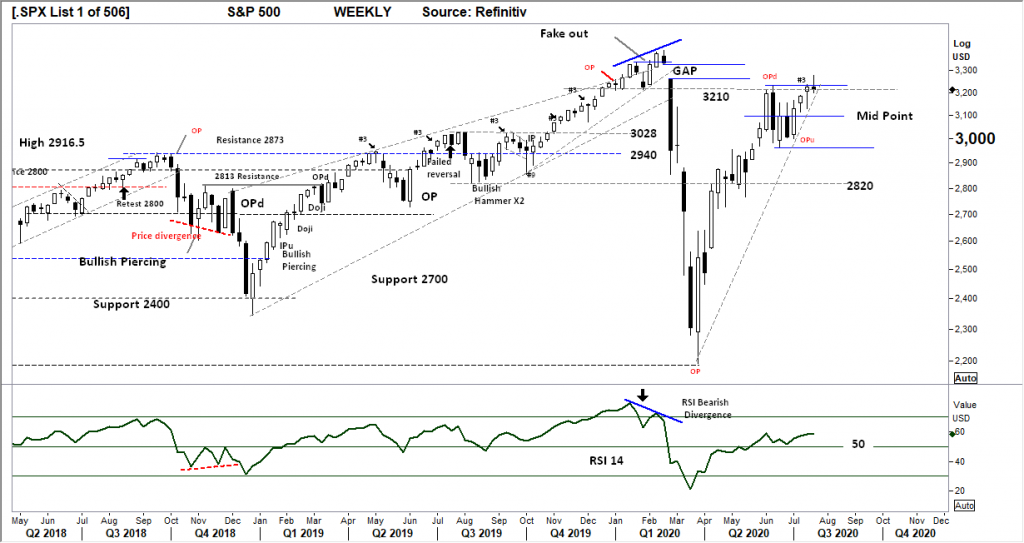 Comments from last week: The Weekly candle of the S&P is marked as #3 type, this is often a warning of price weakness 1 or 2 weeks in advance. While the market can trade higher in the coming week evidenced by the strong close of last week, the GAP remains the area of significance in the coming week. When this price area has been resolved the following price direction can be decisive.

S&P 500 DAILY
Price structure:
Further price declines may be expected as last Thursdays Outside period has potentially set a high for the short term.
The Bullish Gap open last Friday may set the tone for some short term price rally, however the OPd remains a formidable barrier for higher prices in the coming days.
Best outcome in the coming days is further price consolidation to reaffirm the Bullish trend in place.

Indicator: Relative Strength
RSI signal line has rolled lower again and now resides below the key 50 level, a divergence is showing in momentum and price. This is now a swing sell trade signal, however within primary Up trend the failure rate of this type of signal is high. 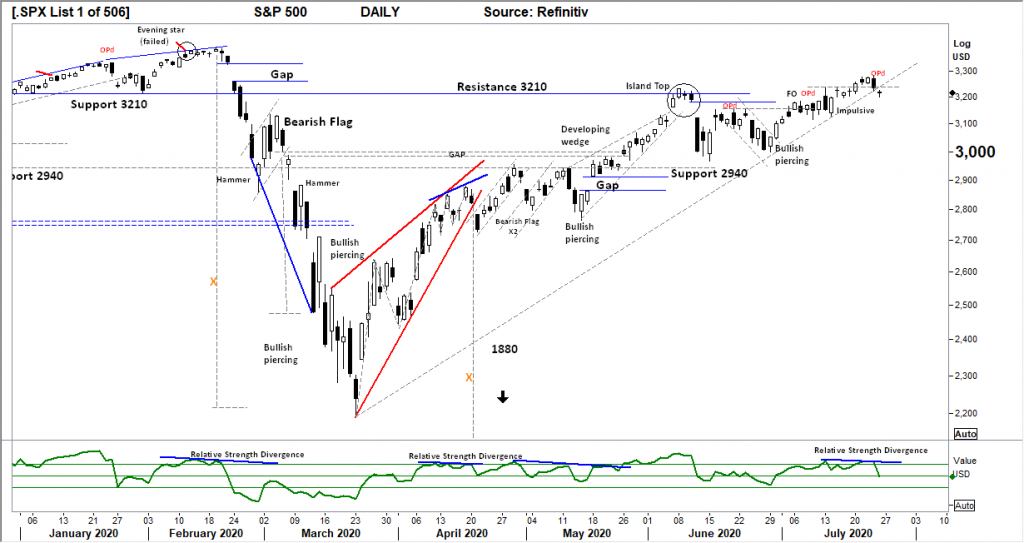 Comments from last week:  Last Monday’s gap opening rejection indicates a level of sellers, while Tuesday made an impulsive move higher the closing of the week remains weak with 3 Doji’s in place.
Consolidation at 3210 resistance is the key feature for the coming week.
Low volatility often leads to high volatility (John Bollinger) may be the order for the coming week.

GOLD – WEEKLY
Price structure:
The underlying price structure remains in a Primary UP trend.
The whole world still wants to be “long” Gold, until they don’t.
Last week’s extraordinary large range “impulsive” move higher will have a lot of buyers wanting to hold a profit. Any price weakness may see some short term selling.
Key support for the coming week will be the round number of $1800.

Indicator:  Relative Strength
Relative Strength remains positive above the “50” level and has made a new high in line with the price chart. This sets up the potential for continued bullish RSI signal above “70”. 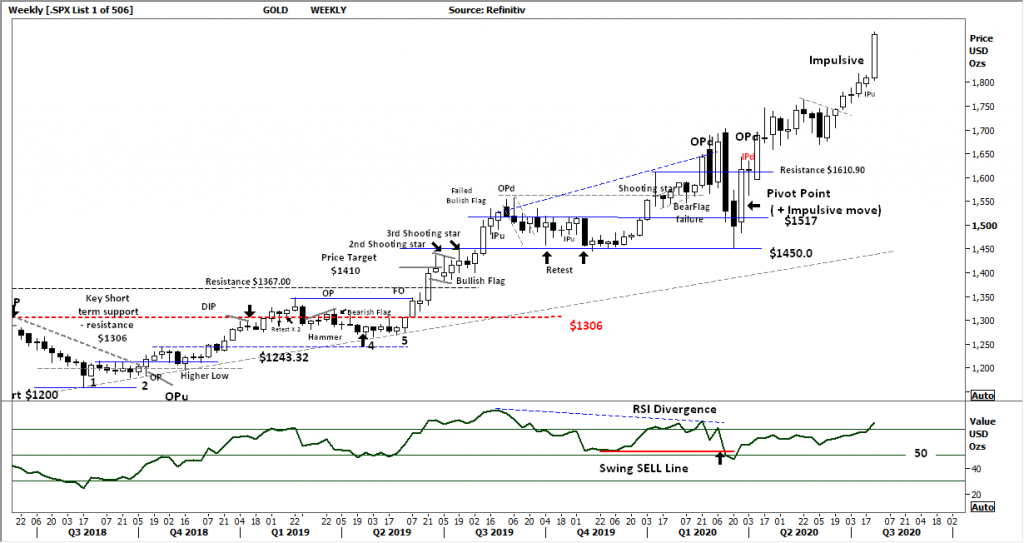 Comments from last week: Gold remains on an extended move higher; I have over layed the Bollinger bands as a guide to how strong this commodity remains.
What’s to be observed is the past 10 weeks have remained above the 20 period SMA (middle) average, while remaining inside the upper band, all good! for now.
The Bollinger bands are slightly opening again as a reflection of current price volatility.
$1745 remains key support in the coming week.

AUD GOLD  DAILY
Price structure:
A significant momentum breakout above the 2600 level with the $2740 resistance level in sight.
Australian Gold producers were marked down heavily last Friday in the face of this rising $AUD Gold price.
With he underlying $AUD looking bullish for the coming week, some further price weakness may be expected in the XAU-AUD price in the coming days.
A retest of the $2600 breakout level would be the first target. 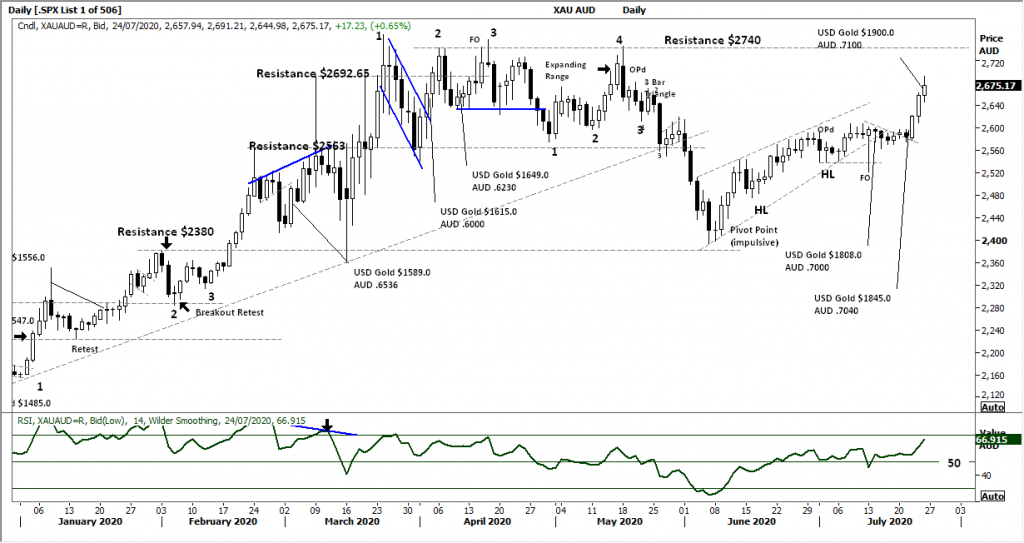 Comments from last week: SIGNIFICANT resistance at $2600 will be the key in the coming week, Gold in Australian dollar terms is at risk of breaking down lower as the $AUD becomes stronger. $2563 will be the daily level to hold as support, with a solid close over $2600 would remain bullish for the local Gold producers.

SILVER DAILY
Price structure:
Silver is an Industrial metal and will be responsive to improving economic news.
Silver and Copper made very strong moves in the past week in anticipation of improving economies.
The daily impulsive moves from the $19.0 breakout level has finished with a small consolidation towards the $23.00+ high.
This remains a very bullish structure for the coming week.
Any short term profit taking with a close below the $22.00 may indicate a top in place and risk should be adjusted.
However the Primary trend is UP


Indicator: Relative Strength
The RSI over 70 is a reflection of underlying strong price momentum. The current reading (91) is high and may see a rollover should price decline. 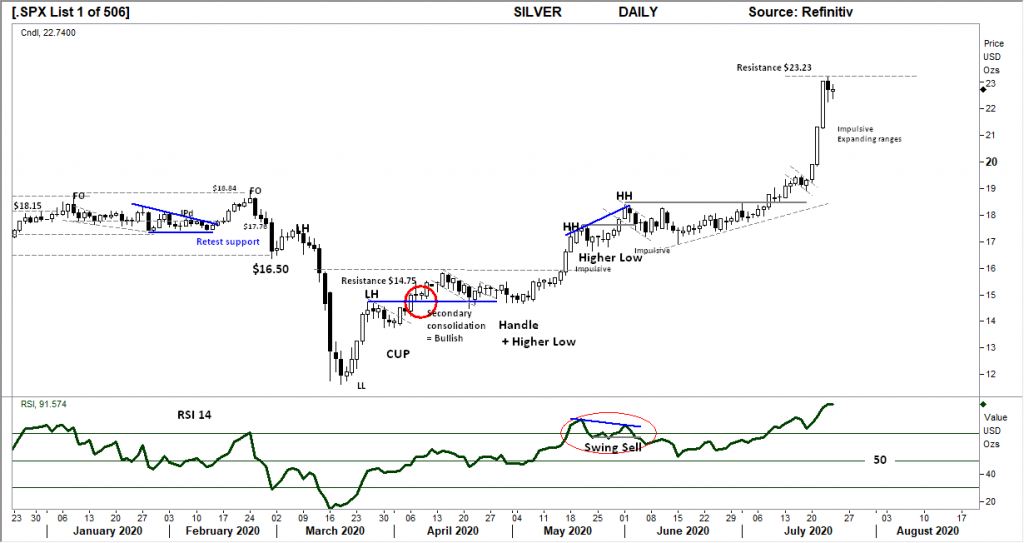 Comments from last week: The breakout over $18.45 remains strong with a potential Bullish flag building at the right hand edge of the Daily chart. Of concern is the sharp down turn of the RSI (see below), the result may be several day’s of retracement to “retest” the $18.45 level. An important level to hold in any price weakness.

AUSTRALIAN VOLATILITY INDEX
Consistent rejection of lower values has ket the XVI around the “20” level for many weeks. The result of uncertainty about a 2nd wave Health pandemic and the ability of economies to recover in the short term.
Forward risk is still being priced in and higher values could be expected. 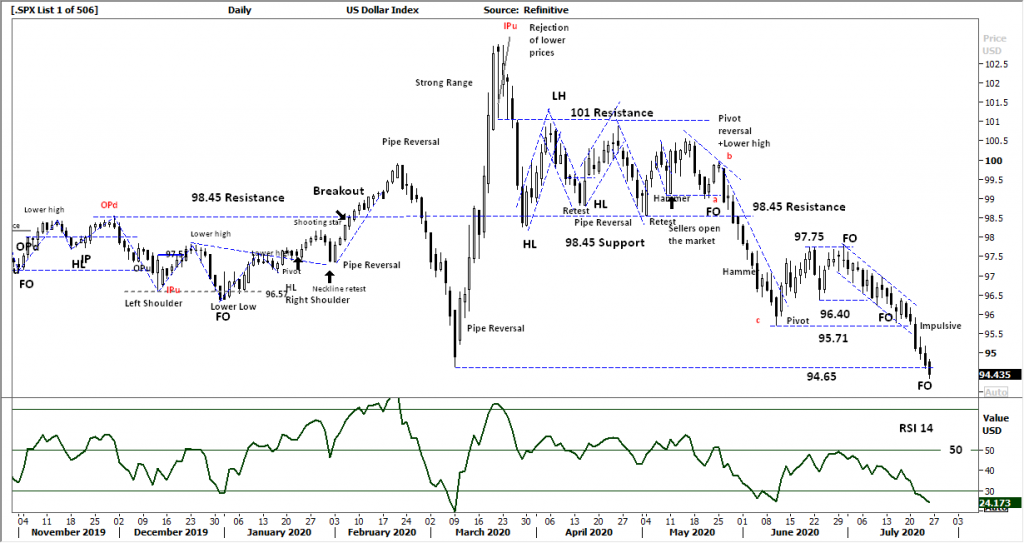 Comments from last week:   Not a great week for volatility as the reading moves higher to 20.65 a sign of increasing concern around Global events of COVID-19. Equities have been under some pressure (read consolidation) as volatility increases. This is one indicator to watch in the coming week, a move higher would put further pressure on equities, a move lower would see price breakouts.

USD DOLLAR INDEX
Price structure:
The expected support of 95.71 has failed with an impulsive (strong) move, the issue with this chart is the closing breakdown below the March low at 94.65. First glance would suggest a corrective move underway.
This 94.65 will be the key level in the coming days. Traders would look for a closing price above this level early in the week to give any chance of a strengthening  $USD.
Gold traders would watch this closely as the weak USD my be the precursor to increasing inflation. 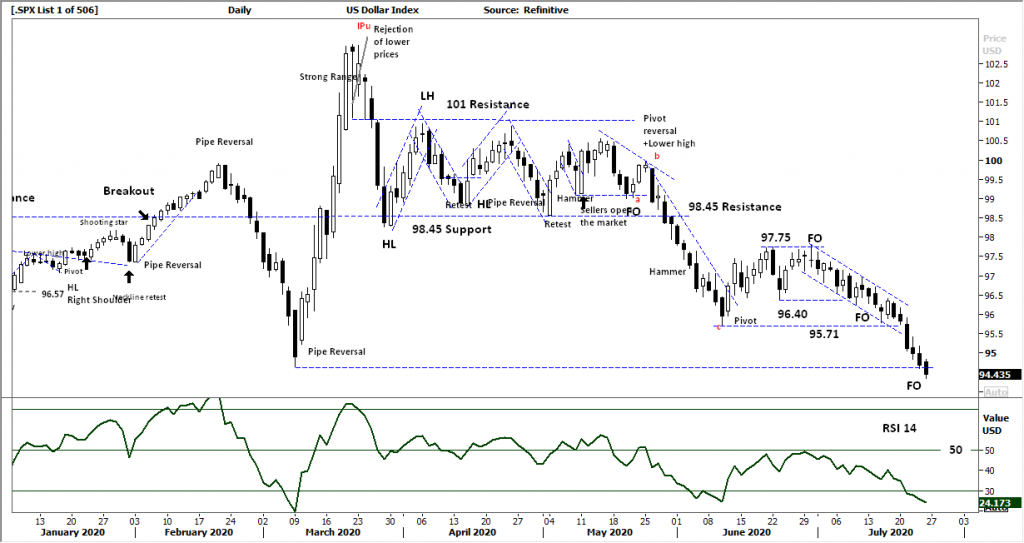 Comments from last week:  Big level of support approaching for the US Dollar index, a breakdown below 95.71 could be a strong bear signal for moves into the 95 and below area. The DXY remains in a Primary down trend.

WTI  CRUDE OIL
Price structure: This commodity is news driven
Eight weeks of sideways consolidation.
Last week saw the price finally move over the key $42.00 level only to fail back below and into the $40.00 closing price range.
Another case of don’t short a dull market, sellers have had opportunity to lower the price instead consolidation prevails.
Driven by production and demand, the European and US summer season may hold the price for weeks to come. 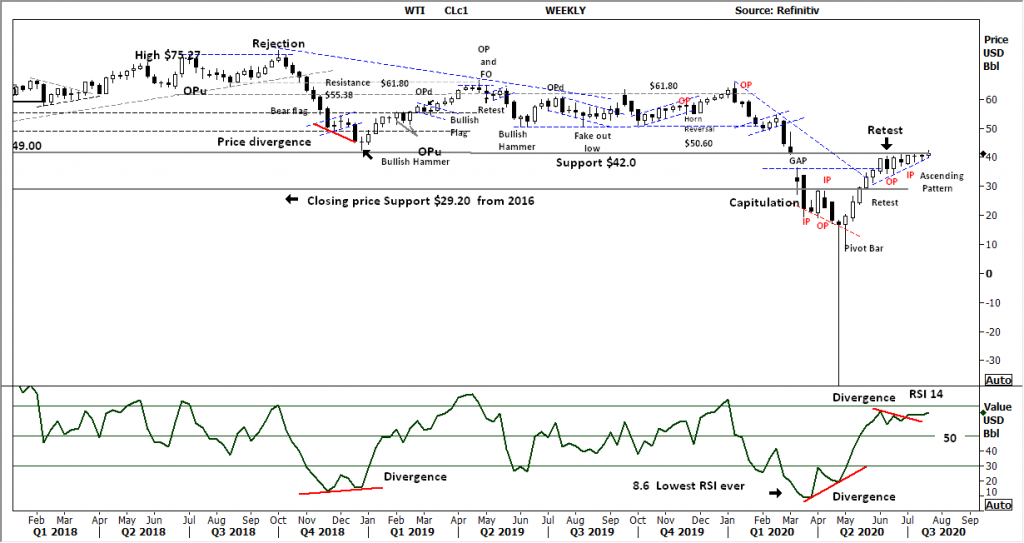 Comments from last week:  Nothing to report here, another week of consolidation below the key $42 level, again I will remind readers, “low volatility leads to high volatility”. The primary trend remains down, however the ascending nature of this consolidation may lead to a breakout higher back into the channel find $42.0 as support and $60 as resistance.