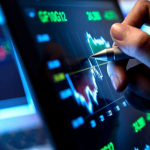 The “midpoint” support level of 6620 remains in play  with resistance of 6930 the immediate go to point for further gains. A close over this level and the Daily resistance of 7130 would be very bullish for further gains. To build a primary UP trend a move over the 7200 level would be an important development. As the market moves into the seasonal end of October, the November period is often a negative month, the 6620 level may come into play again.

Relative strength has again closed below the 50 level as part of the overall decline in relative strength. Price momentum has turned to the upside indicated by the rising RSI, a further  movement over the key 50 level would be very bullish.

Comments from Last week: The low range movement of the week again retested towards the Mid-Point support level of 6620 following the hangman reversal bar 2 weeks ago. A secondary movement above a key support level is developing, this often is the precursor to a further advance as support develops. Two key upside resistance levels remain at 6850 and 6930.

XJO DAILY   Price structure: Coming out of a base.

With the Index moving over the 6850  level Friday’s rejection at the short trendline has set a reverse pivot in a risk off movement.

Given the price action in the US  this reversal bar may be short lived.
A solid close over the 6870 level would force a significant short cover rally with 7130 the upside target.

The Relative strength Indicator (14) reflecting the underlying price momentum has moved higher over the 50-level indicating a change in momentum. Relative strength is moving in sync with the daily action of the market and does not offer any trading signal other than indicating momentum is currently shifting to the upside.

Friday low volume bar was developed on a large retracement bar indicating a lack of conviction for further buying.

Only DAILY volumes over 1Bil on a Daily basis would indicate strong new money buying.

Comments from Last week:  Last Thursdays pivot point has not broken to the downside of the low at 6650 described in the prior week. The highlight of this type of consolidation  is the short range down days when compared to the recent longer up day movements.  A movement over the 6850 level will place the daily chart into an up trend.

The Primary trend remains down, with the current recovery remaining a corrective movement inside that trend. The first weekly resistance levels are 4050 and 4200 which is concurrent with short downtrend line. Last week produced an expanded range over the previous pivot reversal week, this is regarded as very bullish for further gains.

The reading below the 50 level, last week the indicator turned higher, indicating a continuing change in momentum, this week may ultimately continue the momentum move higher. A continuing movement towards and over the 50 level would be a very strong short term bullish signal. Positive momentum requires a reading above the key level of 50 to give a momentum buy signal.

Comments from Last week: With a Weekly pivot point in place and a close over the key level of 3715, a relief rally may follow. First significant resistance is shown at 4050. The Primary movement remains to the downside, a resulting bear market rally may push higher from the current pivot point, a breakthrough the 4200 would put the market into a “corrective” movement (up).

The OPu from 2 weeks ago has played out with the index heading towards the first real resistance level of 3940. The Index price has now moved outside of the short down trendline and heading to the 200 day moving average level. Further gaps remain open above the 4100 level

Relative strength has turned higher but remaining below the 50 level, still a very strong indication of immediate improving momentum.  A slight bullish divergence signal has shown, the current  swing over the internal high point would provides the swing buy signal.

Further price weakness for this index will see the RSI move lower.

Comments from Last week Last Friday indicated a strong outside range upward movement (OPu) following the small flag pattern. The Daily now displays a higher low point above the earlier Fake out low, this is a very bullish setup.

The Gap open Buy signal: mentioned last week has confirmed the current move higher, further bullish activity is seen in the Last bar OPU (outside period up close)
Price action in the Nasdaq indicates the Index is a historical gap filler, in this current observation the higher gap at 12420 would be the current price target.

The Relative strength indicator moving back towards the 50 level and rising again, a signal of improving momentum.

With a strong divergence signal in the recent background a continuing move higher could be expected.

Comments from Last week:  The Daily NDX provided a gap open buy signal last Friday and a clear close outside of the short down trendline. Following the earlier divergence signal the Index is setting a higher low point, follow through higher over 11,500 is required to complete a trending movement. The real observation is the base pattern over the past 4 weeks with last Friday showing the highest close in 2 weeks.

USD Spot GOLD –DAILY: Is it a Bull market?  No

The $16776.0 level has played out again as resistance in this continuing downtrend. The current close below $1656.0  may be followed by a further break of the $1620 lows would confirm further downside potential. A break of the September and current October low may lead to a capitulation movement lower to again test the $1600 level and lower. To build a bullish case a close over $1676 may confirm a higher low in place and offer a bullish view

The RSI moving below the 50 level and falling indicates a swing in momentum direction.

(Price consolidation would naturally see the RSI drift back too around the 50 level. A strong movement either way will show the next directional move.)

Comments from Last week:  History shows the OPu (Outside period up close) appearing at major swing points, USD Gold has again post an OPu, suggesting the only trade is to be long in the coming week. The low price set at the OPu is a higher low than the late September low. Lokk for a closing price above the $1676 level to confirm this momentum shift to the upside.

The resistance level of $19.60 has again set a up a bearish reversal pivot point. The greater consolidation pattern from July continues to develop. For the bullish traders this type of consolidation can lead to a significant breakout up or down. Price crossing back higher over the $19.60 level would be an early indication of a bullish move, as would a price crossing below $18.40 set up a bearish move.

A continuing move above the 50 level and higher would be very bullish signal in the short term. Price consolidation results in the relative strength turning towards the 50 level.

Last week saw a higher closing price following the OPu of 2 weeks ago and further confirmation of support along the $18.40 that began in July. Significant resistance remains between $20.0 and $20.40, however with the base build now outside of the downward channel, optimism for further upside is now in place. See RSI note.

Price remains mid-way between major support and resistance with current consolidation around the $2580 level, current price action would suggest a move lower following Fridays rejection of this level.  Looking at the next support level of $2537, should price  move to this level, some support could be expected. Australian Gold producers may see price consolidation over the coming days.

Relative strength has turned higher from below the 50 level. Overall, momentum has now turned negative to neutral.

Last week saw support set at the old resistance level of $2580, to see a rally from this level US$ Gold needs to rally or the AUD$ is required to decline. The sideways channel continues.

A good technical picture developing, as the USD Index respects past levels. The primary trend has changed to down with the break of the October low.  A further close over the 110.75 level would be bullish for the Index. With the current trend direction a further decline below the 109.47 level would show the sellers remain in control with target towards the 107 level.

The Relative strength has turned sideways in line with price movements indicating further consolidation as the current reading is below the 70 level.

This will move lower to sideways should price decline, only a continued reading back above the 70 level would indicate continuing strong price momentum.

Comments from Last week:  The USD Index is setting a resistance level at 113.92 and retesting the up trendline

The now 3rd  OPd is again a bearish signal for further declines, a break below the 110.75 level would put the 109.47 level in play, a further close below this level will confirm a down trend in place.

This commodity is highly news driven around supply-demand.

The $84.25 level  has held support; however, the last 2 bars of price structure appear to be a developing bearish flag. A further movement close below this important level of $84.25 would confirm a move lower underway. Support remains at $75.20, a further break of this level may lead to a momentum move lower. To see a bullish development in this current price structure a close over $94.0 is required.

The RSI running below the 50 is a result of strong price declines as upward momentum slows, recent price reversal has resulted in a sharp movement over the key level of 50 signalling increasing positive price momentum. This current move lower is indicating the loss of positive momentum. Developing Consolidation with a mixture of advance and declines sets the RSI up to move around the 50 level.

Comments from Last week: Rejection at $94.0 with support at $84.25, the WTI contract price continues to consolidate above $84.25. a strong close below the $84.25 would target the next key support level at $75.20 and signal a Primary down trend in place.